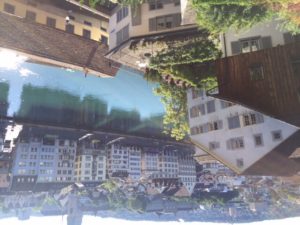 This week I am on my way to the International Society of Thrombosis and Haemostatsis meeting in Berlin. This is a great opportunity to catch up with all the latest developments and research in the field of blood clotting. As a stopover, Angela and I spent a couple of days in Zurich in Switzerland; what a beautiful city. I thought there must be some link between Switzerland and clotting. Switzerland is famous for chocolate, watches and yodelling and none of these are connected to blood clots. Then I realised that Roche is based in Switzerland in the City of Basel. Many of you will be familiar with the CoaguChek used for warfarin monitoring, which is made by Roche Diagnostics, but I found it hard to think of a medication made by Roche linked to clotting.

It was only when I visited the museum in Zurich and saw a display of medications produced in Switzerland that I realised that vitamin K was made by Roche. The photo is from the collection in the National museum: vitamin K (Konakion).