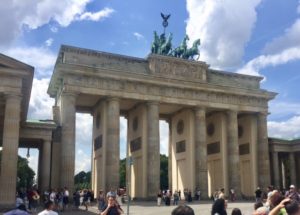 This week I am in Berlin about to attend the International Society of Thrombosis and Haemostasis meeting (ISTH 2017). It is a meeting where doctors and scientists present their latest research. The importance of ethics in research has been brought into sharp focus for me this week as Angela and I visited some of the historic sites in Berlin. 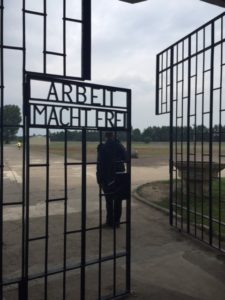 Berlin is a City that oozes history especially from the Second World War and the Cold War. Today Angela and I had a rather sombre day and visited Sachsenhausen Concentration camp. It was a very moving experience with stories of unbelievable cruelty that certainly made us reflect on man’s inhumanity to others. One story I found particularly difficult as a doctor was to hear that children were especially brought from Auschwitz to Sachsenhausen to be used for experiments on infectious diseases.

Memorial to the disabled

Later in the day we went to visit the memorial to the disabled who were killed in the concentration camps. This is not as well known as the memorial to the Jews, but many thousand people with disabilities and mental illness were murdered during the war. The project to kill these people was called the T4 Action. Disturbingly the people involved in this mass murder included doctors and nurses who supposedly believed they were putting these people out of their misery. Many disabled people were gassed or given lethal injections.

One particularly disturbing story relates to a scientist who used the brains of those killed for research and even felt comfortable publishing this research after the war had ended.

The importance of ethical review in research

I have participated in a number of clinical trials over the last 20 years. I often complain about the fuss made around ensuring the trial is carried out ethically, but today I realise just how important it is that clinical trails are performed under very close supervision with careful ethical scrutiny.