Just because you’ve heard of the stages of grief – denial, anger, bargaining, depression and acceptance; it does not mean you can say to a bereaved friend “Oh, you’ve reached depression now, soon you’ll be finished.” And in case you think that’s a ridiculous callous story, it has happened!

But these ‘stages’ were never meant to be about bereavement, nor were they intended to be thought of as a straightforward progression, and from the first it was acknowledged that these ways of adapting could occur in varying patterns. 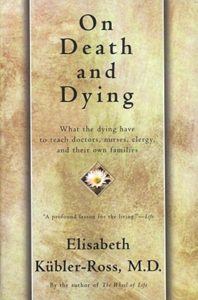 On Death and Dying

Elizabeth Kubler-Ross coined them to talk about the emotional states of people with serious, incurable illness.  Her classic book ‘On Death and Dying’ was published in 1969 and was in many ways the foundation of the hospice movement, as for the first time the needs of dying patients were being considered and they were no longer merely brushed aside as failures of medical treatment.

In the years since, psychologists have come to realise that these feelings accompany most instances of ‘loss’ ranging from losing a job, to children coming into care, to living with chronic illness or disability. In the context of Coagulation Conversation this could refer to those who are having to accept new limitations on life, or have  a health problem like heart disease, pulmonary embolism or thrombophilia.

Rather than being a progression like a staircase, I like to think of these ‘stages of grief’ as learning the steps of a dance; you visit them again and again and gradually see a pattern emerging and get some idea of what comes next.

Here’s a little about each feeling, based on an article I wrote for the Down Syndrome Association for new parents.
Denial

a common first reaction, you hear the news and think “this isn’t really happening” “this only happens to other people”.

It cushions the blow and protects you for a while until your body is better able to cope with the news.

Anger may be a generalised rage at the world or a more personal “Why me?” “How dare this happen to me?”

You may be able to channel your anger into positive action.

Bargaining is that feeling of “If I do this I can make it better”, a time where guilt and responsibility may be strongly felt. It may lead to a change in priorities in your life.

an intense and overwhelming feeling of helplessness and sadness, “my world is falling apart.”

creeps in as you start to think, “so I have this condition, I can live with that”

Most people don’t work through these feelings in order. They experience them all at once and revisit them again and again.

Parents of children with Down syndrome often find themselves revisiting many of these feelings on children’s birthdays, when they start school or when comparing them to children of the same age without a disability.

If you have a chronic health condition, be prepared to revisit them on anniversary dates or when you’re in a situation where you have to compare yourself to someone without health issues.

Remember, all these feelings are a healthy part of your adaption to your ‘new normal’ . To return to our dance analogy; for those of us living with a chronic condition, it’s not about completing the dance, but being able to listen to the music rather than concentrate on the dance steps.

Frivolous Friday Quiz - Do you know your INR from your MVR?
SOCRATES - describing your pain