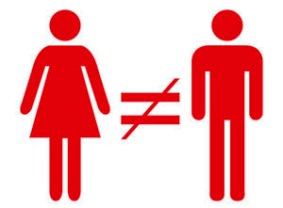 A major problem for people with AF is that they are not put on anticoagulants when they should be. But the study we’re looking at today shows it is even worse for women:

Women are 1.8 times as likely to be undertreated for AF as men.

It’s a recently published study (May 2016) from the Journal of the American Geriatrics Society  by Mark Eckman MD et al from the University of Cincinnati Health primary care network.

There were two main reasons for the study

Primary care doctors entered data on 1585 patients who had been seen between March 2013 and February 2014. They then compared the recommendations of the computerised decision support tool with what treatment the patients had actually been given, looking for patterns of undertreatment or unnecessary treatment.

The patients were aged from 28 to 93 and had nonvalvular atrial fibrillation (that is the AF was not due to having a problem with a heart valve).

Appropriate treatment had been received by only 61% of men and 55% of women.

Those not being treated appropriately were often on aspirin rather than an anticoagulant. Aspirin leads to a significant risk of bleeding but has little or no effect on preventing strokes.

One important point this paper emphasises is that a significant number of people who should be on anticoagulants for atrial fibrillation are not offered treatment. Stroke is the major complication of AF and anticoagulants dramatically reduce the risk. This is one condition where women are at more risk than men, the scoring system called the CHAD score for identifying people at risk of stroke, gives a higher score for women than men and yet women are under treated. The cause is uncertain but it may in part be due to a perceived risk of using anticoagulants in older patients. It is interesting to note that the use of anticoagulants has gone up steadily in this country since the introduction of the new anticoagulant, dabigatran, as more doctors recognise the importance of anticoagulants in these patients.

Medical Journal - AF - How many pills?
ECG - What and Why?