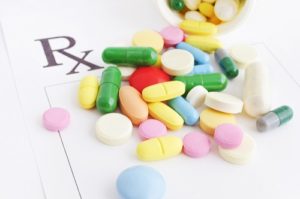 Researchers looked at 18,201 people with atrial fibrillation, AF, and found the average number of drugs each person took was six, with 76.5% of people taking six or more drugs. Most of these drugs are not for their AF but for their other medical conditions.

More than three quarters of patients with AF take six or more drugs.

This is a worrying finding, as polypharmacy (generally defined as the use of five or more concomitant drug treatments) has repeatedly been shown to be a marker of adverse clinical outcome.

It’s a study just published (June 2016) in the British Medical Journal, BMJ, one of the most prestigious and trustworthy medical sources. Authors from multiple centres (Netherlands, USA, Chile, India, Denmark and Sweden) reviewed data from the ARISTOTLE trial “Apixaban versus Warfarin in Patients with Atrial Fibrillation” which was published in the New England Journal of Medicine in 2011.

The authors state that the ARISTOTLE trial showed that “apixaban has been more effective and safer than warfarin, but whether this also holds true for patients using many concomitant drugs is unknown.”

The original ARISTOTLE study, was a multicentre, double blind, double dummy trial performed in 2006 – 2011. 18,201 patients with AF and a risk factor for thromboembolism were randomised to apixaban 5mg bd, or a dose adjusted regimen of warfarin. Patients were monitored for a median of 1.8 years for death, stroke, systemic embolism and major bleeding.

This study grouped these patients by number of concomitant drugs; 0-5, 6-8, 9+ and by sex, age and country of residence.

For this article, we are more interested in polypharmacy rather than the warfarin/apixaban comparison.

The study showed that 76.5% of patients took more than 5 medications, with a clear difference between countries; 53% of patients in the US were on more than 9 medications, compared with 38% in Canada and between 10-21% in other countries. The combined endpoint of stroke, systemic embolus, major bleeding and death showed a correlation with the number of medications with an increased rate across all groups (5.24, 6.59 and 8.92 events per 100 patients years for 0-5, 6-8 and >9 drugs respectively.

Although this study is an post hoc review of data from a trial comparing apixaban with warfarin, it raises some important issues around polypharmacy and anticoagulant treatment, especially warfarin use. First it highlights that polypharmacy is very common in patients on warfarin for atrial fibrillation. The problem in NZ is obviously not as bad as in the US. I was amazed to see that 53% of patients from the US were taking more than 9 medications. As you would expect polypharmacy is directly related with the overall health of each patient; if you have heart failure with your AF you are much more likely to be on more medication than if you have no symptoms, but the striking finding is that patients taking a large number of medications have worse outcomes and more complications; they had a higher risk of stroke and other blood clots, and a higher risk of bleeding.

It also raises some specific issues related to warfarin use.  Patients were more likely to discontinue treatment if there were taking more than 5 medications and the INR control was worse in patients on multiple drugs. Also the risk of drug interactions increases. Even though this is a concern it was interesting to see in this study that patients with drug combinations known to enhance the effects of warfarin did not have an increased risk of major bleeding.

In conclusion this review highlights that polypharmacy is common in people with AF  and where possible medication should be carefully reviewed and warfarin management may require closer control.

Polypharmacy and effects of apixaban versus warfarin in patients with atrial fibrillation: post hoc analysis of the ARISTOTLE trial

Pharmacy Fashion - could you make this dress?
Medical Journal -Sexism in AF treatment?