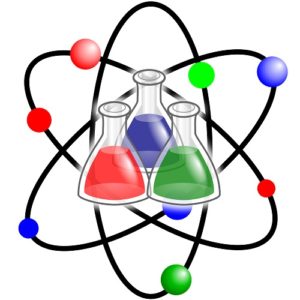 Have you ever wondered how your anti-coagulant drugs work? Well, it’s all related to the not-so-scary science of coagulation.

Student doctors often run screaming from this topic as it can be very complex with seemingly endless nonsensical Roman numerals that make up the biochemistry of the clotting cascade.

But we’re here to make it simple, by going at it in bite sized pieces that will in time build into a whole picture of coagulation enabling you to understand the science behind why you had a clot and how your medication works.

Today’s quiz covers the basic ground work about blood,  then we’ll have two posts on the absolute basics of clotting which can be covered by two swear word innuendos,

No, we don’t mean having a random drug test! Rather what your blood is composed of.

Although it looks like a red liquid, blood is actually a straw-coloured liquid that has blood cells floating around in it. 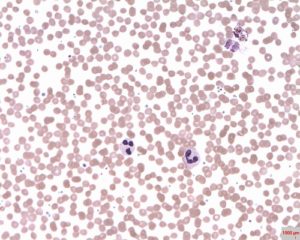 If a drop of blood is spread thinly on a microscope slide, it’s called a film. A blood film shows just how many more red cells than white cells there are. 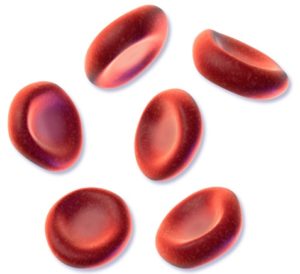 How many red cells do you have?
Red blood cells take up about 45% of your blood. This % is called your haematocrit. You have about 5 million red cells per microlitre of blood. Usual blood volume is around 6 litres so you have about  30 trillion (30,000,000,000,000) red blood cells in total.
What is the medical term for red cells?
Erythrocytes; ‘erythro’ meaning red and ‘cytes’ meaning cells
What is the purpose of red blood cells?
Red cells are involved in oxygenation, one of the core mechanisms of life. They carry oxygen to your body cells where they give up oxygen to the cells and pick up the waste product, carbon dioxide. In the lungs they exchange the carbon dioxide for more oxygen.
What do red blood cells look like?
They are red because they contain iron in the form of haem. They are a squashed disc shape (in UK they sell liquorice sweets of exactly this shape) because this provides the maximum surface area for gas exchange.
From a cellular perspective, what is unusual about red blood cells?
They are the only cells of the body that don’t have a nucleus, so they only need a small amount of oxygen to survive and can give up most of the oxygen to the other tissues.
What medical conditions are associated with RBCs?
The commonest is anaemia, when you have too few RBC and too little haemoglobin. The commonest cause is due to a lack of iron. 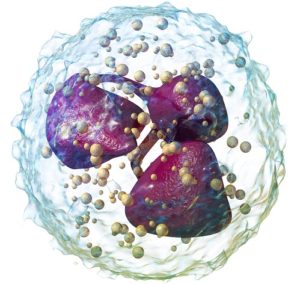 What is the medical term for white cells?
Leucocytes; ‘Leuco’ meaning white and ‘cytes’ meaning cells. There are five different types of leucocytes: neutrophils, basophils, eosinophils, lymphocytes, and monocytes
How many white cells do you have?
The normal white cell count is between 4 and 10 thousand million cells in one litre of blood.
What is the purpose of white blood cells?
White blood cells are involved in fighting infection and in maintaining your immune system. During an infection your white blood cell count will rise. Neutrophils rise in most infections particularly bacterial infections and  lymphocytes go up in viral infections. Monocytes produce chemicals to activate the immune system and help with scavenging rubbish from the blood.
What do white blood cells look like?
The five different types of white cells all look a bit different. They can only be seen under a microscope if they are stained with special chemicals. Neutrophils have several lobes to the nucleus as seen in the picture above. Monocytes are large cells with one nuclear lobe and lymphocytes are small with a dark nucleus. Eosinophils have red granules in them and basophils contain blue granules. Haematology is quite a colourful specialty. 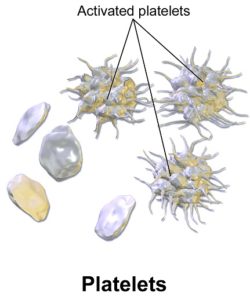 How many platelets do you have?
Platelets are small cells in the blood, in fact they are not really cells as they are fragments of a larger cell called a megakaryocyte. These megakaryocytes are not seen in the blood but are only found in the bone marrow. Platelets are formed when part of the megakaryocyte cytoplasm breaks off and the platelets are released into the blood stream. There are between 150 and 400 thousand million platelets in one litre of blood.
What is the purpose of platelets?
Platelets play a key role in blood clotting. When you cut yourself, platelets stick together and form a plug to block up the hole as the first step in blood clotting.
What do platelets look like?
Resting platelets are small disc shaped cells containing a few granules and do not look very exciting under the microscope, but when they are activated by contact with a damaged blood vessel they change their shape dramatically. An activated platelet develops multiple projections and looks a bit like a jelly fish. The projections are called pseudopodia and develop within seconds.