We’re posting an occasional series that’s rather different to our usual educational posts. It will cover quotes that may help when you’re facing adversity or finding your new normal.

We’re posting on the weekends, so if you’re not interested you can just ignore these posts, but if you find them helpful you’ll have a little more time for reflection. 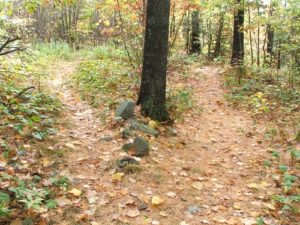 Two roads diverged in a wood, and I—

I took the one less travelled by,

And that has made all the difference.

I like to think of my journey as being on a less-travelled path, maybe one I wouldn’t willingly have chosen, but beautiful all the same.

When I researched this poem,  I was rather disappointed to discover that Robert Frost wrote this poem in 1915 as a joke!  It was for his walking-partner friend who found decision making difficult. The path is chosen by impulse and only later is it reframed as a conscious decision. I guess that could be related to adversity though. Something happens that’s outside our control, so we strive to create meaning and control in it.

You can listen to it read to some rather soothing background pictures here.