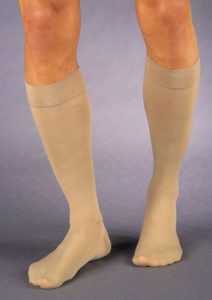 Paul had written about the importance of flight socks on long flights  but then didn’t wear them himself because he found them so uncomfortable: Between flights, in an airport toilet, I  actually broke a toilet seat cover because of the weird manoeuvring I was doing while having difficulty squeezing flight socks onto my already swollen feet: And yet, I just took it for granted that people would comply when asked to wear compression stockings all day, every day, for two years after a DVT, to try to prevent post-thrombotic syndrome.

A recent medical journal article has highlighted how hard it is for people to use compression stockings but why they should try.

Eight hospitals in the Netherlands took part in the study which was published in May 2016 in the British Medical Journal.

In the BMJ study, 518 patients who had been wearing compression stockings for a year since a DVT, were either told to continue for another year or to stop wearing them. At the end of the 2nd year, the researchers compared the incidence of post-thrombotic syndrome in each group.

13% of people who continued wearing compression stockings had post-thrombotic syndrome, compared with  20% in the group who stopped.

85% of the people wearing stockings wore them for six to seven days a week.

The authors noted the big difference in stocking wearing between their group and that in the SOX study. They thought it may be because the SOX study was of people who’d just had a DVT, so were just starting with stockings, whereas their group were people who’d already shown they could stick with wearing stockings for a year.

Post-thrombotic syndrome is common and can be quite unpleasant. This study shows that to get benefit from compression stockings, you must be willing to wear them every day, and even then the difference in the incidence of post-thrombotic syndrome is not that great. I recommend compression stockings to my patients, but I do not push them too hard, as the evidence that they are helpful is quite limited.  I tell them, that some people find them quite uncomfortable but on the other hand some people find they help a lot with symptoms like general discomfort, aching and swelling in the leg.