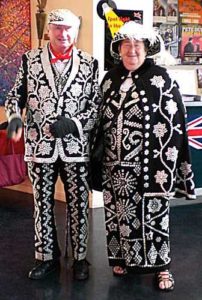 My mother has always told me that my brother is a Cockney as he was born at Westminster Maternity Hospital which was then within the “sound of Bow Bells” – in earshot of the bells of St Mary-le-Bow in London’s East End.

As an aside, these same bells are claimed by some to be the bells that caused  Dick Whittington to “Turn again Whittington, Lord Mayor of London”

Cockneys are known for their pearly king and queen (as shown in the photo) and their rhyming slang, where they replace a word with something that rhymes with it. We were told as children to go up the ‘apples and pears’ (stairs) to bed. To make it more complicated the last words can be dropped, so it no longer rhymes; so stairs can be called ‘apples’. You probably have used the expression “blowing a raspberry” but did you know the word ‘raspberry’ is short for ‘raspberry tart’ which rhymes with ‘fart’! 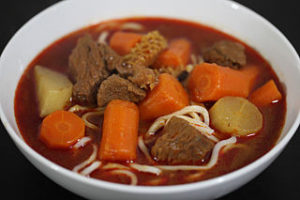 It’s even more complicated in the case of rhyming slang for the word ‘blood’: Blood is thought of as ‘claret’ and this is replaced with the rhyming words “boiled beef and carrots”.

I don’t think this is in common use medically! Would you be willing to tell your doctor you ‘d had a ‘boiled beef and carrots’ clot?

As well as being a famous dish, Boiled Beef and Carrots is the name of a famous Cockney music hall song from 1909.