This week Angela and I are staying in Rovaniemi in North Finland on the Arctic Circle. Our hotel is beautiful with an arctic theme. Our bathroom has a large picture of a Polar bear in the shower and a small polar bear lying on our bed. Today we visited the Arktikum Museum which focuses on the ecology of the arctic, and I learnt some  interesting things about the Polar bear.

Polar bears are the largest animals in the arctic, with no predators. I wouldn’t like to meet one on a dark night as they can grow up to 700kg and are rather partial to meat. In fact, a polar bear’s main diet is seal and they particularly like the seal blubber. Adult males often only eat the fat and don’t bother with the meat. So why don’t polar bears have a terrible problem with heart disease and blood clots. We are constantly told that a high fat diet is bad for us and contributes to heart disease but polar bears are thriving and do not appear to have a heart problem.  The answer is that the polar bear has a gene involved in fat processing that helps it metabolise fat more efficiently.

In our blood we have a protein called LDL, or low density lipoprotein, this is associated with cholesterol 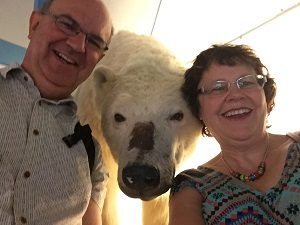 transport and is often referred to as the “bad” lipoprotein. When you have a cholesterol check your doctor will look at the total cholesterol and will be particularly interested in how much is associated with LDL. A high LDL is associated with heart disease and blood clots. LDL is normally cleared from the circulation by another protein called ApoB. Polar bears have an ApoB variant which appears to be more efficient and helps to clear the bad cholesterol from the circulation and transport it to fat cells where it is much safer. To quote from an article in Scientific American, “The polar bear has an anti-junk food gene which allows it to survive on a diet that would kill most mammals”.

Unfortunately nobody has been able to engineer this gene to work more efficiently for humans, so I would advise you to keep to your low fat diet and avoid seal blubber.