Just before we left for Copenhagen for the European Haematology congress, Paul wrote about the dos and don’ts of travel after clots. Paul has had multiple pulmonary emboli, including one that occurred on a flight, so flying is a particular concern of mine. Now we’re safely back in New Zealand, fighting jetlag, I thought you might be interested to discover which of his own advice Paul followed and which he ignored. 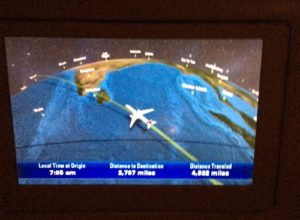 No. We left our home in small town NZ at 10am Thursday and arrived in Stockholm at midday on Friday, sounds like a 26-hour journey right? But factor in the time difference and we were travelling for 36 hours! That included a fourteen-and-a-half-hour leg from Sydney to Doha! It’s actually very hard to take flights of less than 8 hours from New Zealand, as you tend to end up in the middle of the ocean!

In part. We were in economy for the short flights within NZ (one hour) and from NZ to Australia (four hours), then business for the main flights from Sydney to Europe, through Doha (22 hours). This is mainly because I collect frequent flyer points, (It’s a great hobby) and I managed to get the return flight for 120,000 American Airlines points which cost me 2 cents each. 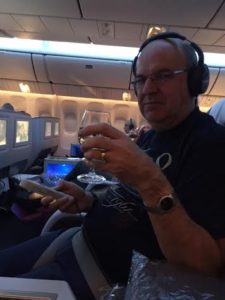 More or less, he just had one glass of wine in 24 hours of plane travel.

Yes – I insist we each take a bottle of water on the plane with us in addition to accepting water each time the cabin crew offer it.

Yes, he needed frequent toilet visits after drinking so much water! At each airport we walked rather than using the moving walkways and in Doha we had to walk a long way to clear security then walk all the way back again to find the next gate. 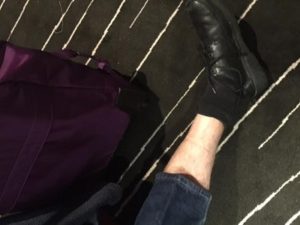 No – I always wear support socks, but Paul finds them just too uncomfortable. We both end up with swollen itchy ankles anyway. 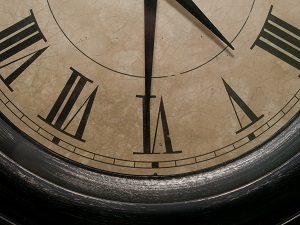 Yes – even though it was a bit hard to work out when to take it with the time change. He packed some of his medication in his hand luggage and some in his check-in baggage: I put some in my hand luggage too, just in case!

Paul’s advice: Don’t get too worried. If you’re on anticoagulants you have a lower clot risk than other passengers.

Yes – he always worries less than me! We had a lovely journey and time away but it’s always good to be back home!

Exercise during flights - airline's advice
The twelfth of never? How long do I need anticoagulants?