This mutation was discovered in Leiden in the Netherlands.

What is the Factor V Leiden Mutation? 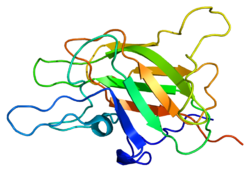 This is a variant of the clotting factor known as Factor V. The clotting factors in the blood are proteins. Proteins are made from a series of amino-acids joined together in the correct order. When they are produced in liver cells they fold up in a specific way so they function correctly. They are often depicted as a string diagram as shown in the image. If you have the Factor V Leiden mutation, then the factor V produced in your liver has one different amino acid. The amino acid arginine at position 506 (506th amino-acid in the sequence) is replaced by a glutamine. This does not alter the function of the protein, it still works as a clotting factor normally, but it cannot be broken down so easily.

Normally clotting is seen as a balance where the body produces activated clotting factors when you need them and removes them when you don’t. Factor V is managed in just this way. During the clotting process factor V is activated and helps to clot the blood, but it is also removed quickly by a protein called activated protein C. The activated protein C works by chopping factor V into two pieces so it can no longer work.  The chopping takes place next to the arginine amino-acid at position 506 in the protein. Factor V Leiden does not have an arginine at this position so the protein cannot be cut up. Therefore people with the Factor V Leiden mutation are unable to remove factor V efficiently and the balance of clotting tips in favour of a clot.

What is my risk from this condition?

To put this in perspective it is reasonable to compare the risk with other risk factors. For example the risk of a blood clot is increased between 4 to 6 fold in women who take an oestrogen containing oral contraceptive.

Can I take an oral contraceptive if I have this condition? 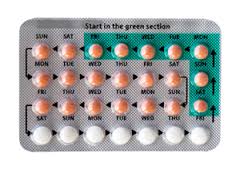 This question is difficult to answer. If you have the factor V Leiden mutation and take an oestrogen containing oral contraceptive, the risk of a blood clot is about 30 times higher than normal. This sounds high but still only works out at about 1 in 500 young women with this condition have a clot. In the past there has been debate among doctors about the need to screen women for this condition before going on the pill. The view is that it is not reasonable to do this. The problem is that a screening program for the whole population is expensive and may not make much difference. The program would find about 4% of women with this mutation but what advice to we give them? Should they not take an oral contraceptive? Remember there are already millions of women world-wide on a contraceptive with this condition and the vast majority never have a clot.

My advice is that women who have had a blood clot or who have a strong family history of blood clots (especially if a parent or sibling has had a clot) they should not use an oestrogen containing contraceptive. However I do not believe that screening asymptomatic women for this mutation is helpful and can cause distress and confusion in women with a low risk of thrombosis.

Can I take a progesterone only oral contraceptive?

The risk of thrombosis from a progestrone only oral contraceptive is very low and can be used by women with the Factor v Leiden mutation. Also it is safe to  use a  Mirena intra-uterine device, these do contain some progesterone but only a very small amount is absorbed and there is thought to be no risk of thrombosis.