“I used to go running. Will I ever be able to again?” and  “Will I ever get back to normal?” are just two of the questions Paul’s been asked by people who’ve had a pulmonary embolism.

Recovery can be very variable and may take a long time, but for inspiration, look to Serena Williams!

This #1 ranked female tennis player had a pulmonary embolism back in March 2011. She had a serious injury to her foot in July 2010 and this and her pulmonary embolism (presumably following a DVT in her injured leg) meant she was unable to play tennis for nearly a year.

The pulmonary embolism occurred when she was on the way to an Oscar’s party and had difficulty breathing. She only went to  hospital at the insistence of her physiotherapist and was found to have multiple clots in both lungs. 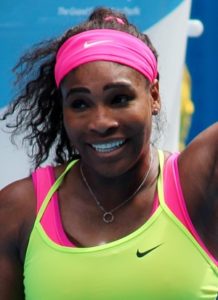 Serena gave an interview to the Guardian newspaper and said,

“It got to the stage where it felt like I could hardly breathe. Some days I didn’t get out of bed at all. I just laid on a couch thinking why has this happened to me? The second surgery [on her lung] was tough, more mentally tough than a lot of things I’ve been through, including my sister dying. This has given me a whole new perspective on life and my career – and not taking anything for granted.”

Now, fully recovered, her website lists her trophies which include; 6 Wimbledon, 3 French Open, 6 US Open and 6 Australian Open Tennis trophies.

We will never be able to match her tennis prowess, but her attitude and successful recovery can give us all hope.