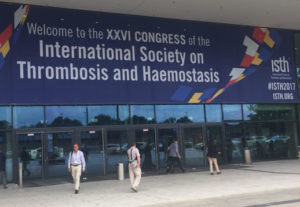 I normally tell my patients that they are likely to make a full recovery from a deep vein thrombosis or a pulmonary embolus. Unfortunately some people do develop long-term complications such as post phlebitic syndrome causing chronic leg problems, but in general I do not expect long-term problems. However there is some evidence that having a DVT or PE can have an impact on day to day living well into the future. This was nicely illustrated in a study presented at the International Society of Thrombosis meeting I recently attended in Berlin 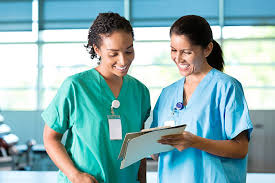 The Nurses health studies are large studies that follow the health of registered nurses in the USA. The first study recruited  in 1976 and had over 120,000  participants and a second study in 1989 had a similar number of nurses involved. The participants are followed up with regular questionnaires. Since the study started approximately 3000 of the participants have had a DVT or PE. 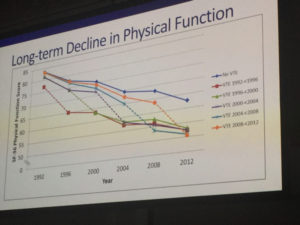 Every 6 months the study participants are sent a questionnaire. One section deals with physical activity and asked about routine activities like climbing stairs, carrying groceries and walking etc. The participants give themselves a score between 1 and 3 depending on how easily they can do the activity: a score of 3 means they have no difficulty whereas a score of 1 means they are very limited.  Over time, since the start of the study, the average score has gradually fallen for the whole population, which is what you would expected as we all get less active as we age. However the physical activity score was significantly lower in participants who had a DVT or PE during the study.  Interestingly the score dropped at the time of the DVT or PE and remained at a lower level for the rest of the study. This suggests that a DVT or PE has a long-term impact on normal day to day activity for a proportion of people.

Venous thrombosis is a long-term disease

To me this emphasises that venous thromboembolic disease is a serious condition and in some people should be regarded as a chronic disease with long-term consequences.