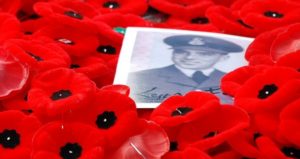 On Armistice day, we use poppies as a memorial. Blood-red poppies were some of the only plants to grow on the battle fields of the Napoleonic and First World War.

They grow best in fertilised (in war by human blood) and turned over ground (in war by horses, artillary or explosions).

They came to represent the sacrifice of the fallen soldiers and were first adopted as a memorial symbol by the Royal British Legion in 1921. The identification was enforced by the famous poem, ‘In Flanders Fields’ by John McRae, from Canada.

John McRae was a Canadian military doctor and artillery commander. In 1915 he conducted a burial service for one of his comrades and that evening began drafting his poem.

In Flanders fields the poppies blow
Between the crosses, row on row,
That mark our place; and in the sky
The larks, still bravely singing, fly
Scarce heard amid the guns below.

We are the Dead. Short days ago
We lived, felt dawn, saw sunset glow,
Loved and were loved, and now we lie
In Flanders fields.

Take up our quarrel with the foe:
To you from failing hands we throw
The torch; be yours to hold it high.
If ye break faith with us who die
We shall not sleep, though poppies grow
In Flanders fields. 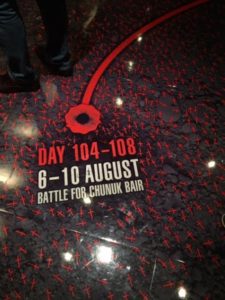 New Zealand’s national museum, Te Papa, currently has a very powerful exhibition about Gallipoli and NZ involvement in the First World War. A trail of poppies on the floor lead you around with little red crosses marking how many soldiers were lost in each battle. It was very moving and when Noah (our 17 year old son with Down syndrome) came out he told us, “war is very sad”.