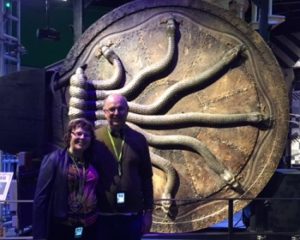 We’ve arrived in the UK now. We flew into Luton airport so we could visit the nearby Warner Brothers Studio tour of the studios where Harry Potter was filmed. I’ve even found a tenuous link between the Harry Potter Tour and coagulation. And that is snakes! On the tour we met the Basilisk, the serpent of Slytherin, which Harry Potter killed in the book “the Chamber of Secrets”. 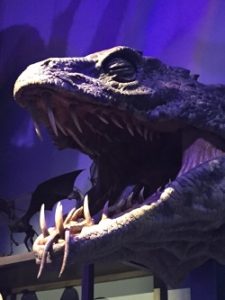 Unlike any other snakes, the Basilisk kills people by looking them directly in the eye. But it does have something in common with some other snakes, in that it produces poisonous venom and many snake venoms contain chemicals that mess up normal blood clotting. A poison that makes your prey bleed to death is quite efficient. The amazing thing about snake venoms is that many species of snake target blood clotting but they do it in very different ways and often the venom will only affect one part of the clotting process. For example, the snake Russell’s Viper produces a venom that just activates one clotting factor, a protein called factor X. Very small amounts of this venom can be fatal by causing the blood in the circulation to clot very rapidly. This gory video shows just how quickly it works.
However, snake venoms do have some use in medicine. We use Russell’s viper venom for a blood test to diagnose a condition called lupus anticoagulant which is associated with blood clots.

Fortunately, antidotes are available for most snake venoms but I’m glad I don’t have to find the antidote that Harry Potter needed when his arm was pierced by a Basilisk fang. I’m not quite sure which drug company markets Phoenix tears!

The twelfth of never? How long do I need anticoagulants?
Happy 100th Birthday Heparin!