A few weeks ago we started a series on the science of coagulation with a post on Taking the Pxxs. This was about the first stage of clotting called primary Haemostasis. In this post I am going to introduce the next phase.

If you have ever studied any physiology and had to learn about blood coagulation I suspect you found it a bit complicated. I know from teaching medical students that it is not a topic that thrills them. The problem is that it is a complex process and at first sight does not seem to follow a logical pathway. Most students end up learning a series of blood clotting factors without really understanding how the whole process fits together. In reality blood coagulation is an amazing process with its own beauty. It truly shows us the complexity and intricacy of nature. The clotting process maintains an important balance allowing your blood to remain liquid in your circulation and to stop bleeding after an injury. An earlier post on the shell fish, the Paua, illustrates the importance of a coagulation system. The Paua do not have a clotting system and they will bleed to death after a minor injury. 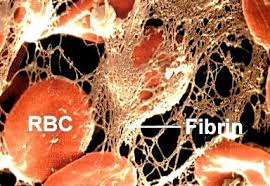 I believe that the best way to understand blood clotting is to start at the final step of the process. What is the whole purpose of the clotting system? It is is ultimately to make a blood clot. Blood clots are largely composed of one particular protein called fibrin. Fibrin is amazing stuff and forms a mesh like a fishing net which traps red blood cell, white blood cells and platelets and stops bleeding. Fibrin is made from a protein in the blood called fibrinogen. The blood contains quite a lot of fibrinogen it makes up about 7% of the circulating protein (most of the protein in your blood is albumin or globulin) at a concentration of 2 to 4 g/l.

The fibrinogen in the blood doesn’t clot on its own, it has to be activated by another protein called thrombin (not technically an ‘F’ word, but we thought that Frombin was close). Thrombin is really the key clotting protein, everything about the clotting system seems to revolve around it. It has many different actions but the main way it helps to make clots is by chopping off part of the fibrinogen molecule. Thrombin is called a protease and actually cleaves part of the fibrinogen protein. This makes the fibrinogen molecules stick together and form a fibrin network. So the fundamental part of clotting is the production of thrombin which converts fibrinogen to fibrin. 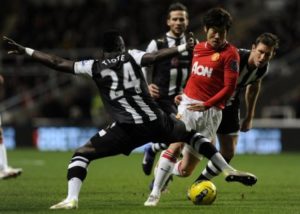 So the next question is, where does the thrombin come from? Thrombin is a very active protease and too much in the circulation could be harmful. In fact you only want to make it close to an injury or it will activate the fibrinogen in the circulation and make clots where you don’t want them. This could block blood vessels and cause problems like a stroke, heart attack or DVT. Therefore in order to control clotting, there is an inactive precursor of thrombin in the blood called prothrombin, which has to be converted to the active form of thrombin before it will work. This is where all the other clotting factors come in. The process of clotting is often called the clotting cascade. This is a good name as the process starts with the activation of one clotting factor which then activates the next, which in turn activates the next, and ultimately converts the prothrombin to thrombin.

I like to think of the process of clotting a bit like a soccer match. It starts at kick-off, the ball is gradually moved forward with the ultimate aim to score a goal. Each player has a different role and without one of them it would be hard to score. The process of clotting is similar, an injury kicks off the process and each of the clotting factors plays a role to ultimately reach the goal of a blood clot. If one of the factors is missing the clot won’t form.

In this post I have given you an overview of the whole process. In subsequent posts I hope to pick out some of the fascinating things (at least I find them fascinating) about each part.

What can go wrong?

The balance of blood clotting is sensitive and the loss of one clotting factor can cause bleeding. The strange thing is that some missing factors cause a serious problem where as other cause virtually no problem at all.