Happy Halloween – a good day to cover the ways that vampires have come to be linked with coagulation. 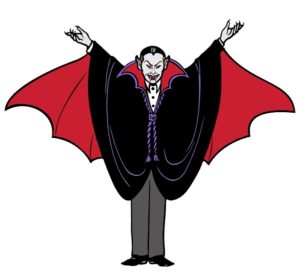 Vampires, Dracula teeth and bats have become synonymous with the decorations for Halloween, but the story behind Dracula and vampires is quite interesting and goes back to the middle ages and is possibly linked to a rare blood disorder. It is not quite clear where the story of the vampires came from. There are some theories that the myths of vampires arose during the Black Death or plague as one of the symptoms of the plague was bleeding from the mouth. The vampire obviously became part of literature when Bram Stoker wrote Dracula in 1897. It is believed that some of his inspiration for the story comes from the story of Prince Vlad Tepes, a member of the Romanian Royal Family; Transylvania is in central Romania. Vlad ruled during the 14th century and was a member of the order of the Dragon, called Dracul in Romanian (derived from Draco, the latin for dragon). Vlad was a particularly bloodthirsty ruler and enjoyed impaling his enemies on wooden stakes; possibly where Stoker got the idea of a wooden stake through the heart to kill a vampire. 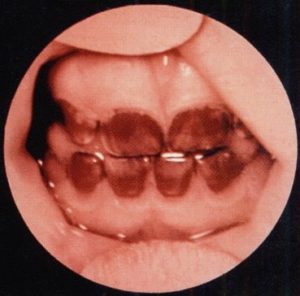 Some of the mythology about the appearance of a vampires possibly comes from the features of a rare blood disorder called Congenital erythropoetic prophyria. This is an inherited disease and is extremely rare but has been reported in central Europe and was thought to be due to inbreeding amongst nobility. The valleys of Transylvania is one place where cases have been reported. People suffering from porphyria have severe light sensitivity and become disfigured from scarring, they tend to only go out in the dark. Other features include shrunken gums making their canine teeth more prominent, discoloured red teeth, called erythrodontia, increased hair growth (werewolf myth) and red urine. One of the most debilitating symptoms of this condition is abdominal pain which is made worse by eating certain foods, in particular the chemicals in garlic; hence the vampire’s aversion to garlic. Surprisingly one of the things that helps their symptoms is drinking blood, the haem pigment in blood can survive the gastric acid and is absorbed in small amounts and relives the condition.

Bats have also become linked to Halloween, in particular the vampire bat as this particular animal lives on blood, including human blood.

Vampire bats feed in total darkness and have specialised hearing to identify sleeping breathing animals and a temperature sensor in the nose to find the site where the blood vessels are closest to the surface of the skin. Some species only feed on the blood of mammals. The bat has razor sharp front teeth. It feeds by making an incision in the skin and then laps the blood from the incision. The link between vampire bats and blood clotting is in the bat’s saliva. 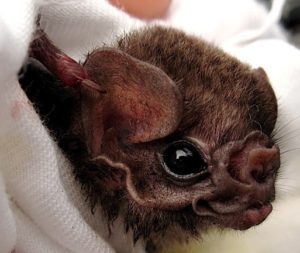 The saliva contains several chemicals; some act as anticoagulants, some numb the site of the bite and one is a clot buster drug that breaks down blood clots. A protein discovered in the 1990s was called Draculin and was partially characterized and shown to inhibit two of the clotting factors in the clotting pathway, but more recently the true nature of this protein is less certain. Another protein that inhibits different clotting factors has also been purified from bat saliva. This is known as Desmolaris and was characterised in 2013.

As well as an anticoagulant to stop clotting, the bat saliva also contains a clot busting chemical which breaks down blood clots to keep the blood flowing, it also enables the bat to regurgitate unclotted blood to feed their young. This chemical, called Desmoteplase  has the most potential for use in clinical practice. It is more active than tPA, which is the standard treatment widely used to treat heart attacks and strokes. Desmoteplase is undergoing clinical trials at the moment. As the nature of the first protein named Draculin is uncertain, many people, including the press, have nicknamed this new clot busting drug, Draculin too.