It’s Halloween on Monday and we’ll be explaining some of the medical links between vampires and coagulation, but in the meantime, we’ve found four blood-related ways to spoil yourself over the weekend.

1. Watch a movie with the kids (or grand-kids)

Who ever would have thought a vampire movie could be described as ‘sweet’? But that’s exactly what came to mind as I watched “Hotel Transylvania”. I started it while feeling exhausted on a plane journey and it was good enough to keep me watching till the end.

It’s a children’s cartoon about an over-protective vampire father and his daughter who predictably falls in love with a human. It also features werewolves, zombies and other ghouls, none of whom are scary in any way. In fact the vampires don’t even drink blood, they just live off blood products!

I think my favourite scene was near the beginning, where dad sings the baby a lullaby;

“Hush little vampire, don’t say a word, papa’s going to bite the head off a bird” 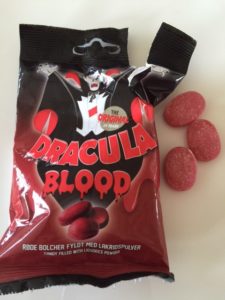 We picked these up in Scandinavia, where apparently they are a ‘classic bonbon’. The packet says they are “popular amongst fearless candy lovers with a penchant for truly strong liquorice.”

I am quite fond of liquorice so decided to try them: But I’m not used to salted liquorice!

They pack quite a punch with a sweet almost cough lozenge like exterior then a  very salty liquorice powder filling. Definitely an acquired taste.

I thought I hated them, but then found myself trying another .. and another! 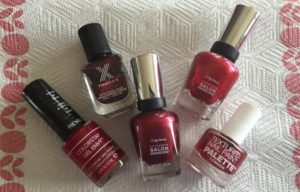 My daughter Hannah is an avid nail varnish collector and even uses one of the bedrooms in her house as a make-up room!

It was Hannah who first got me interested in nail varnish and now I have five favourite red polishes. Sometimes I think the names are the best thing about them! 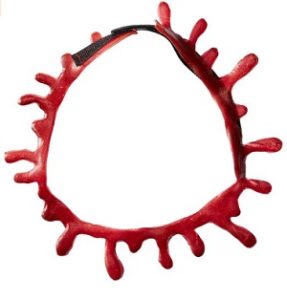 We featured this in our post Coagulation Decoration, but it’s not quite in the same league as the medic-alert bracelets in that post and is probably best as a Halloween costume prop! it’s made from latex and is available from amazon at US$6.50

Do you celebrate Halloween? Do you have any other blood-related ideas?

Stroke is treatable - World Stroke Day Campaign
Do you believe the 2 biggest myths about anticoagulants?