I’d never visited Australia’s capital city, Canberra, so when an opportunity arrived for a girl’s weekend there, I was very excited. I arrived there with two of my daughters and my daughter-in-law for the hottest weekend on record. The temperature was 39 degrees, so we were very pleased to enter the air-conditioned National Gallery.

It was a great way to spend a morning (as well as being cool!). You will soon realise how little I appreciate modern art, because as I looked round this section, I found my mind wandering to this blog and how some of the pieces could tie into coagulation. What do you think about these three? 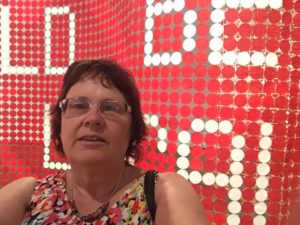 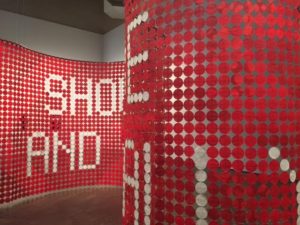 My children tell me I am hopeless at taking selfies and this shot is proof of that! I think this looks like a close up of whole blood showing that it’s composed of red and white blood cells, but it’s actually from the Australian Geometric Abstraction collection and is entitled “Big words (not mine) irrational thoughts should be followed absolutely and logically (circle work)”.

The artist, Rose Nolan, made the work from 8,860 hessian circles, a wave shape screen, with the words made from the white circles. The blurb about it says, “her work brings together big philosophical ideas and wry humour”. 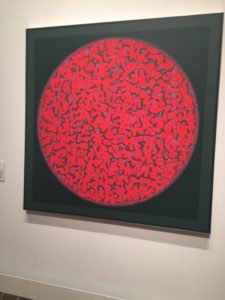 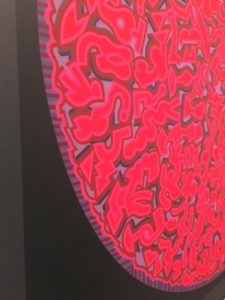 Its true title is ‘Noumenon XXXII, Red Square’ to do with the philosophy of pure idea and form, the artist, Alun Leach-Jones, is interested in the ‘deeper meanings residing within forms’ so the geometry of his work is not predictable.

I think this furniture looks like a blood clot, but it is actually an Obo chair built in 1974 by Grant and Mary Featherston.

The blurb calls it, a “playful spherical chair, reflecting the period’s engagement with new concepts of informal living and visions of the future. placed anywhere in a room, its frameless form and bright colour engages users visually while challenging sitters to sink into the chair as it adjusts to their shape.”

Do you think a few of these chairs would work well in your local anticoagulant clinic?