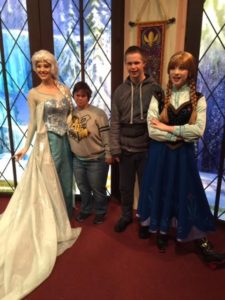 I thought it might be interesting to look at some common figures of speech that include the word ‘blood’. “My blood froze” is a good start as we’ve just returned from a holiday to Disneyland where our children Noah and Lily met the characters from the movie ‘Frozen’.

Lily enthusiastically went forward to meet them but Noah became totally overawed and lagged behind until Ana and Elsa called him. Afterwards Noah told me it was because he was frightened that Elsa would freeze everything around him, but I think he was really just rather anxious and shy.

I guess you could say he had a mild case of “my blood froze”, which is usually taken to mean “to affect with terror or dread”. The term is an idiom (a group of words established by usage as having a meaning not deducible from those of the individual words) as if your blood actually froze you’d be dead.

One interesting thing I discovered is that a study from Bonn University showed that the term could be more literal than we think, as they discovered that intense fear can change the level of clotting factors! They compared people with severe panic disorder with a healthy control group and although levels were within the physiological (normal) range, those with anxiety had a more activated coagulation system!