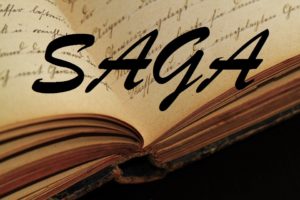 David Clotterfield and Clara Clearvessel are both on warfarin and as we follow their saga we discover their beliefs about anticoagulation through the various comments they make about their lives.

At the end of each scene, you’ll get a chance to test your knowledge; Are their comments true or false?

Before reading this episode, you may like to catch up with the previous scenes

David was visiting Clara at the library, when he’d started experiencing nausea, sweating and chest pain. Clara had called an ambulance and David had handed her his phone to call his son Dan.

Daniel Clotterfield was out fishing when his phone rang. It was his day off so he almost didn’t answer, thinking it would be the pharmacy on some work related matter. But when he looked, it was his dad calling.

“Hi dad, How are you?” he answered. But to his shock a strange woman started talking.

“You don’t know me, but I met your dad at the lab, we’re both on warfarin you see. I’m Clara Clearvessel and I work at the library….oops I’m gabbling, I do that when I’m nervous”

“Well, no, not really. I’m with him in the ambulance on the way to the hospital. I think he’s had a heart attack.”

“Your dad doesn’t want you to worry” Clara repeated.

“He would say that! I’ll meet you at the hospital. You must tell them he’s on warfarin. They can reverse it with Vitamin K if they need to.” Daniel sounded like a pharmacist now.

What do you think of these statements? True or false?

You must tell them he’s on warfarin

Whenever you go to hospital it is important to tell the attending doctor if you are taking an anticoagulant. In this case David is on warfarin and his doctors will need to know. It is particularly important for a suspected heart attack as the doctors may want to give thrombolytic therapy to get rid of the blood clot. This has a higher risk of bleeding in somebody taking warfarin, but it is not totally contraindicated and is used in some cases.  Even if thrombolytic therapy is not used, most patients are given a low molecular weight heparin (Clexane or Fagmin) as part of their treatment. This can increase the risk of bleeding if given to somebody taking warfarin.

[collapse]
They can reverse warfarin with Vitamin K

Vitamin K will reverse the effects of warfarin, but it does take several hours to work. In a suspected heart attack the doctors may not want to reverse the effect of warfarin. They would only consider giving vitamin K if the INR was very high and they were considering adding another anticoagulant like low-molecular weight heparin. In general vitamin K is only used when there is active bleeding, or when the INR is very high (>9.0), or emergency surgery is necessary.